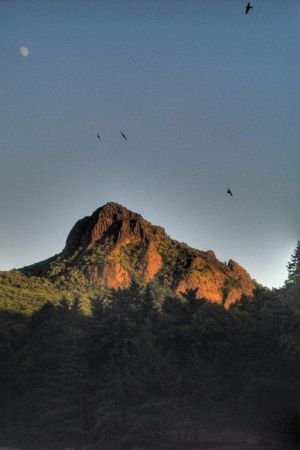 Bořeň is a rocky hill, called high rock, is high above the valley of the Bílina river, in the lower part is partially covered by a forest. The peak is at 539 m. It is a dominant feature of both the town of Bílina and the whole of the Central Bohemian Mountains, thanks to its characteristic silhouette it is also very well visible from many distant places (for example from Žatec), looking from the northwest reminds the silhouette of the lion lying. Bořeň is the largest surface mound in Central Europe. On the rocky slopes there grow a number of protected plants such as rock bark, alpine starfish, leafy iris, bark beetle, crayfish, creeper, spring primrose, poisonous bastard. On the opposite southern slopes of Kaňkov hill the spring pheasant grows. It houses large protected area here. In addition to the usual bird species, there were also 22 specially protected birds. There is also a green toad and a snake smooth. A National Nature Reserve was established in Bořeny in 1977. The educational trail leads from Bílina up to the summit, from where a circular view opens to all sides. In 1996 it was built by students of the Bílina grammar school. The trail starts from the spa area of ​​Kyselka in Bílin and leads the national nature reserve Bořen up to the summit. On the way, you will find twelve information boards to familiarize you with geological development, flora and fauna.

From the climbing point of view, Bořeň is one of the most important sandstone areas in the Czech Republic. The rocking rock is solid in most sectors and offers a variety of wall, climbing and chimney climbing possibilities. The high walls, especially in the north, provide the possibility of multi-lane mountain views. The first mountaineering activity at Bořně started at the beginning of the 20th century, but more detailed information was not retained. The first known names of "first-time" include Gregor (Gregor) and Berthold from the Alpine Club from Žatec, which are called the rock formations of Berthold's finger and Gregory's chimney. In the southern area there is the Devil's pulpit, in the east the Stone Waterfall, in the north the Polednín Stone, and in the West the Episcopal Church or Varhan. As early as 1917, the construction of a tourist cottage, which would be at the foot of Bořně, began to be built. In 1925, it was built by the White Mountain Gebirgsverein, an amount of 500 Austrian crowns. The opening ceremony of the Bořeň chata took place in 1928 and on that occasion the pub was opened.

Cottage Bořeň now acts as a restaurant with a guest house. Bořeň was also visited in the past by lovers of beauty and romance. The famous German poet J. W. Goethe visited him several times and captured his impressions in the sketchbook. Also, the great traveler Alexander Humbolt remarked in his diary that he was delighted with the look and the beauty of this place. Several legends are related to him, among the best known are the reputation of the Bohemian witch.