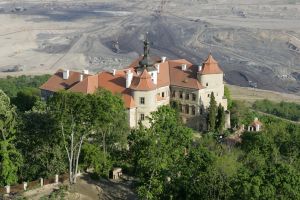 Castle Jezeří is one of the most dominant dominant of the Ore Mountains. The original medieval castle, which is the first documented mention of 1363, was rebuilt in 1549 to a Renaissance chateau that was acquired by the Lobkowicz family. He made two fires after which he was rebuilt to the present form. The end of the 18th and beginning of the 19th century were the culmination of the building and cultural history of the castle. Since 1820, the castle theater has been in operation. There have been many prominent visitors, including J.W. Goethe. During the Second World War, they administered the Nazi chateau. Further events were no longer particularly favorable for the lock. After the war, it became the property of the state. For some time, the Army had lived there, signing a great deal in his present bad state.

The chateau terraces once had a great view of the beautiful farmland that stretches from the foothills of the mountains to Most. Today's view is quite different, but at least instructive. It shows how easily the landscape can be disposed of by surface coal mining.

On the opposite slope from the castle, a circular ruin of the Count's Chapel is hidden among the tall trees. In fact, it is not a chapel, but an old family lobkowicz tomb. But she never served her purpose. Almost three hundred years, the "chapel" has kept its mystery and is very well preserved for its age.

The chateau interiors feature a large oval hall, adapted for the chateau theater and the Chapel of the Sorrowful Virgin Mary with stucco decoration. Although the lock is under reconstruction, it is partially accessible.