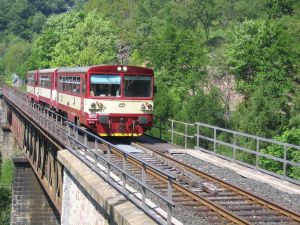 When you get ready for the Ore Mountains in Teplice and think about the best route, try to include in your plans also a ride through the Krušné hory railway. In winter and in summer, a train from Most or Dubí will take you to Moldava, which is an ideal starting point for exploring the local part of the Czech-Saxon border. And you will be able to admire not only the surrounding beautiful nature, but also the interesting buildings of this 125-year-old technical monument. Its history began to be written in the second half of the 19th century when brown coal mining was under the Ore Mountains and the issue of its sale had to be solved. It was necessary to connect the area with Prague, and it was also considered a foreign country, namely Saxony near Chemnitz, Saxon Kamenice.

In 1871, therefore, the Prague-Duchy Railway Company was founded, and the construction of the individual sections of the railway started in the same year. During the six years, the rails were joined by the towns of Most, Osek and Grave, but it seemed worse with the line to Saxony. In the way, there were uncomfortably high mountains, and their lack of financial means also played their part. Nevertheless, at the end of 1884, the train could travel to Moldavia and next year to our neighbors. The first half of the 20th century was a happy time for the track, but after the Second World War the border crossing to Germany was abolished. So the railway could only serve local residents and also for various one-time purposes, for example as an important communication in the construction of the nearby Flájská dam.

Since the 1960s, its importance has grown for the tourism of this part of the Ore Mountains until 1996, when Czech Railways interrupted the operation due to poor technical condition. However, they did not intend to reconcile these people, who expressed their will after the restoration of the traffic with a successful petition directed by the operator of the line, the Ministry of Transport and the Chamber of Deputies. Since 1999, negotiations have also been held to reopen the border crossing. However, it was not until 2008 that the results were more pronounced. You can now go to the romantic mountain railway from Most, where you will get to the train station of Moldaváček.

If you look in the direction of travel, your attention may be drawn to the hill with the castle Hněvín and then the train continues to the first major station, which is Louka near Litvínov. Here are the tracks of two tracks - our Moldavian and the second one from Teplice to Litvínov. After leaving the station, the set will start to move in the direction of the left-handed arc and head towards Osek via the Lom stop at Most. The original station building has been preserved by the original electromechanical device, which controls the switches and lights. If you decide for a short break here, do not forget to visit the extensive complex of the Cistercian monastery, a magnificent memory of Baroque architecture with valuable artwork. Right next to the railway station you can also see the Rýzmburk Castle, which leads to the ruins of the nature trail.

Another significant stop on the route is the Grave. Long cargo trains had previously been dismantled in several parts to handle a difficult climb. After crossing the 32 m high and 130 m long bridge, the train continues up to Dubi Station, about 2.5 km from the city itself. It is worth seeing in particular the Church of the Immaculate Conception of the Virgin Mary. Right on the station building, you can see the wooden model of the train - after World War II, it was made by one of the staff who cut through long nights in the service. Dubi station is dead, which means that the set goes from the same direction in which it arrives and goes in a different direction through the clear switch. Behind the railway crossing then it starts climbing up the hill of the Krušné hory and after a few kilometers stops in the picturesque village of Mikulov. Once the settlement was founded by miners, but today it is inhabited mostly by holidaymakers and the slope of the nearby Storm in the winter are mainly sought after by winter sports enthusiasts.

The path continues along a 334-meter-long tunnel, then a 117-meter-long bridge, and another tunnel to rest for a while in Mikulov-New Town. Cross-country skiers have only a short walk to the nearby winter area. Another section is no longer so demanding and after overcoming the rock cut, the set very slightly up to Moldavia. Here, you might be surprised by the great train station. Today it is final, but at a time when trains were going to Germany, customs and post offices were in Moldavia and inter-city trains were handled here. Perhaps you will also be interested in the fact that in 1938 Adolf Branald, a forward-looking expeditionary writer, described his work on the railroad in the work of Valčík of Lohengrina. His short career at the track is reminiscent of a commemorative plaque located on the building and painting in the station's vestibule. The route of the track had to deal with the difficult pitfalls of the mountainous terrain and with a very variable and sharply rising level, that is to say with the often varying slope of the track. We also remind you that the height of the bridge between Mostem and Moldavia is almost 500 m. Therefore, it includes a number of bridges, bridges, passes, embankments and tunnels proving the extraordinary technical advancement of the track builders. Not in vain, the section between Louka u Litvínova and the final station was declared a cultural monument in 1998.

Practical information:
Timetable can be found on ČD's website under number 135 or at www.volny.cz/krusnohordraha. On Saturdays, Sundays, holidays and holidays strengthened trains, in winter transport of skis, sleighs, snovboard, in the summer transport of bicycles.