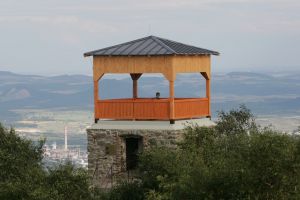 The observation tower at an altitude of 788 meters has undergone interesting developments. The first wooden lookout tower in Jabbína was up to several meters in height and was opened in 1884. However, the weather conditions did not fit the building, and therefore the tower was broken at the turn of the 80s and 90s and the first repairs had to be done. Further damage was caused in 1908, but this time the money was not recovered. During the First World War, the tower was destroyed. German tourists did not let themselves down and after years, in September 1929, a new tower stood at Jabbina. After 2nd St. the war was also the second building fell victim to the vandals, we could only see the foundations of the original tower from 1884. In the spring of 2009, the Klíny Sports Center opened in cooperation with the Statutory City of Most and United Energy, a.s. and Emeran 1860, s.r.o. reconstruction of the lookout to its form from 1929. Based on the Petra Holubičková project, the company realized Pavel Císař. The reopening of the Jabbín observation tower was held on June 28, 2009 and now the observation tower is open to the public.

How to: Cycling, Walking