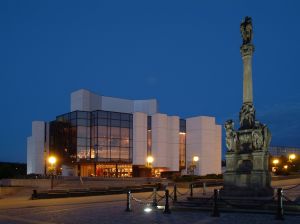 The current building of the theater was opened in 1985. The auditorium accommodates 500 spectators and the stage is equipped with modern stage technology. The biggest feature is the fact that you do not find a right corner in the theater building and a revolving stage that allows you to constantly change the scene environment.


Regional Museum
The site of the museum, along with the old Mostem, was demolished as a result of mining activities. The final seat was the building of a former German real grammar school (then a secondary industrial school), where the museum operates today. The reconstruction of the entire building was completed in 1996, when the museum was solemnly open to the public. The present Regional Museum in Most is focused on preserving, professional records and replenishment of its rich funds, focusing mainly on the history and nature of the Most, in the wider context of the adjacent areas, namely the Ore Mountains and the Central Bohemian Highlands.


Exposition of Old Bridge
The Municipality of Most together with the Municipal Library of Most prepared an exhibition devoted to Old Most. They will be pleased not only by witnesses who can remember the famous nooks, but also other people interested in the historic city of Most. Visitors will find here a unique capture of the Bridge on historical maps. In addition, there are large-format contemporary photographs or preserved stone elements from demolished houses, stoves from stoves or metal covers of door-door locks. Tables with texts tell of the city's troubled history. On one wall is also the complete version of the decision on disposal of Most, which until recently was marked with the mark SECRET. Interested people can check out the books on Most and eventually sit down and start with them. Part of the exhibition is, inter alia, interactive whiteboard with a plan and photographs of the historic city that will bring visitors directly to Old Bridge.


Gallery of Fine Arts
The Exhibition Hall of the Fine Arts Gallery is located in the basement of the Dean Church of the Assumption of the Virgin Mary. The gallery presents works by Czech and foreign artists of the 20th and 21st centuries and has recently focused mainly on the French and German spheres. Guided tours to selected exhibitions and lectures with authors.


Podkrušnohorské Technical Museum
The specific objective of the museum is to create a zone of industrial and technical monuments in the Krušné Mountains region, especially in the deep and surface mining industries in the brown coal basins of northwest Bohemia, the treatment and use of coal, the chemical industry, customs, traditions and customs associated with mining, activities. There is also a simulated gallery with examples of mining methods and 3D projections, authentic models from the chemical and mining industry.


War Museum of the Sudetenland
The museum focuses on the history of the Mostecka and the Sudeten issue, occupation and expulsion. Museum collections map the historical period of our history. The private museum is located in the 1959 battalion. Since the bunker is not yet accessible from the street but only from the basement of the house, the museum is accessible only by prior telephone call. If you are interested, it is possible to show you the military history of the district of Most. You will see where the Czechoslovak defensive fortifications of Most, the ROP vz.36 and 37 from 1936-37, the German war bunkers. You will look at the remnants of German anti-aircraft protection stations, flakes that have been protected by Sudetenländische Treibstoffwerke AG Maltheuern bei Brüx - Sudeten Factory for Fuel a.s.

Designed for: A good tourist, Senior