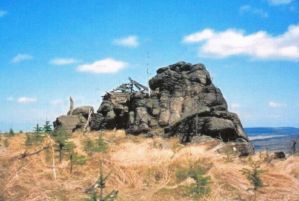 The Bear Rock is the second highest mountain of the Most and the highest peak of the Rudolice Mountains, measuring 923.8 m. It forms a round peak and on the flat top of the mountain there are top rocks and boulders. The name of the Bear Rock was given a mountain, according to the last beast living in the Ore Mountains in the 18th century.

Its own peak is about 7 m high rocky gorge, accessible from the north along the old stone steps. In its highest part there is a top mound made of stones painted with mortar, and on its top a granite stone marking the triangulation point. The top of the stone lies at an altitude of 923.84 m. The area in the immediate vicinity (150 m) is the protected area of ​​the geodetic point, as evidenced by the signs with the state emblem. About 50 m north of the peak is a distinctive, from a distance visible rock tower; on a small plateau on its side is a half-dilapidated log cabin. The rock with the log cabin, the rocks at the triangulation point, and the so-called Last Rock lying about 100 m south of the top, represent a mountaineering terrain of local significance.

From the summit there is a beautiful circular view, one of the most beautiful in the Most: in the north of the hill of St. Catherine, in the northeast of Javorina, Cerny vrch, Loucna, Stropnik, in the east of Litvínov, in the southeast Mostecká panna, Bořeň, Milešovka, Zlatník, Hněvín and other hills of the Czech Central Mountain, South - Atecko, in the southwest of the Doupov Mountains, in the west - Klínovec.

A forest path leads to the top, which turns from Nová Ves - Červená Jáma road (the first branch to the right of the waterworks). The path first goes straight up, then turns to the right, and at the crossroads turn left. This path leads up to the ridge north of the peak you reach along the trail.