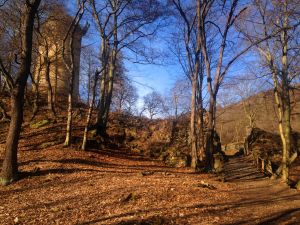 The beautiful spring weather attracts the walks, and the ruin of Rýzmburk Castle, hidden in the woods above the town of Osek, is an ideal place to go for a trip. In the Czech translation, "Giant Castle" was one of the largest Gothic castles in Bohemia, the first mention of this castle complex dates back to 1230, when it was probably started its construction. The original owners of the castle - lords of Rýzmburk or Hrabišice - belonged to the most important noble families of medieval Bohemia and decisively participated in the development of the entire region of northwest Bohemia. The castle has two basic parts. The core with residential towers and chapels is located in the highest part of the rocky ridge. To it from the southern and western sides is a much larger area enclosed by a rampart tower, which still dominates a massive tower (so-called "zephyr"). During its existence, the castle changed its owner many times until it was finally abandoned in the first half of the 16th century and began to deteriorate. The ruin became a popular cruise during the 19th century, and in the 1930s even visited the famous romantic poet Charles Hynek Mácha.

How to: Cycling, Walking